Among 100+ researchers from all over the world, our work has been awarded the 1st Prize in the Healthcare track of the Data for Refugees Challenge Turkey (read more) with our study about Reducing measles risk in Turkey through social integration of Syrian refugees (read the paper).
In collaboration with MOBS and DPCS research units at FBK, we developed a model demonstrating how enhancing social integration of Refugees will decrease the chance for epidemic outbreaks in Turkey due to measles.

Political and environmental factors—e.g., regional conflicts and global warming—increase large-scale migrations, posing extraordinary societal challenges to policymakers of destination countries. A common concern is that such a massive arrival of people— often from a country with a disrupted healthcare system—can increase the risk of vaccine-preventable disease outbreaks like measles. We analyze human flows of 3.5 million (M) Syrian refugees in Turkey inferred from massive mobile-phone data to verify this concern. We use multilayer modeling of interdependent social and epidemic dynamics to demonstrate that the risk of disease reemergence in Turkey, the main host country, can be dramatically reduced by 75 to 90% when the mixing of Turkish and Syrian populations is high. Our results suggest that maximizing the dispersal of refugees in the recipient population contributes to impede the spread of sustained measles epidemics, rather than favoring it. Targeted vaccination campaigns and policies enhancing social integration of refugees are the most effective strategies to reduce epidemic risks for all citizens. 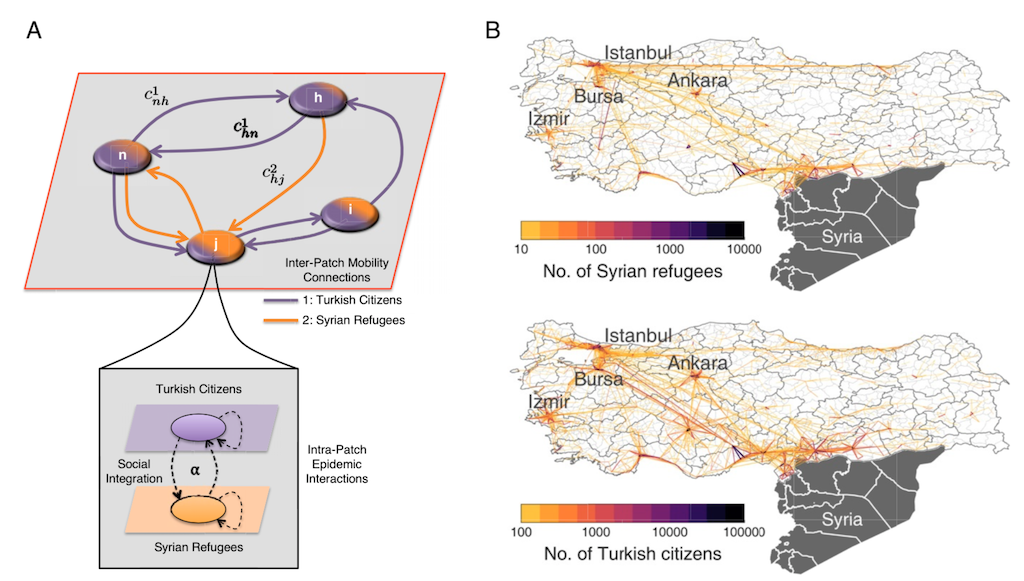 Figure: Model structure and human mobility. (A) Schematic illustration of the model considered in this work. Each prefecture of Turkey is considered as a node of a metapopulation network of geographic patches. Two populations, namely, Turkish and Syrians, are encoded by different colors and move between patches following the inferred interpatch mobility pathways. Turkish and Syrian populations encode two different layers of a multilayer system (31–33), where social dynamics and epidemics spreading happen simultaneously. (B) Mobility of Syrian refugees (Upper) and Turkish citizens (Lower) between the prefectures of Turkey as inferred from CDRs. Different colors are used to indicate the number of individuals moving from a prefecture to another.