HERMES is an ad hoc Monte Carlo code for the realistic simulation of UHECR propagation in a magnetized Universe, that I have developed during my PhD research activity. You can find here a recent talk about HERMES. Customizable options/models include: 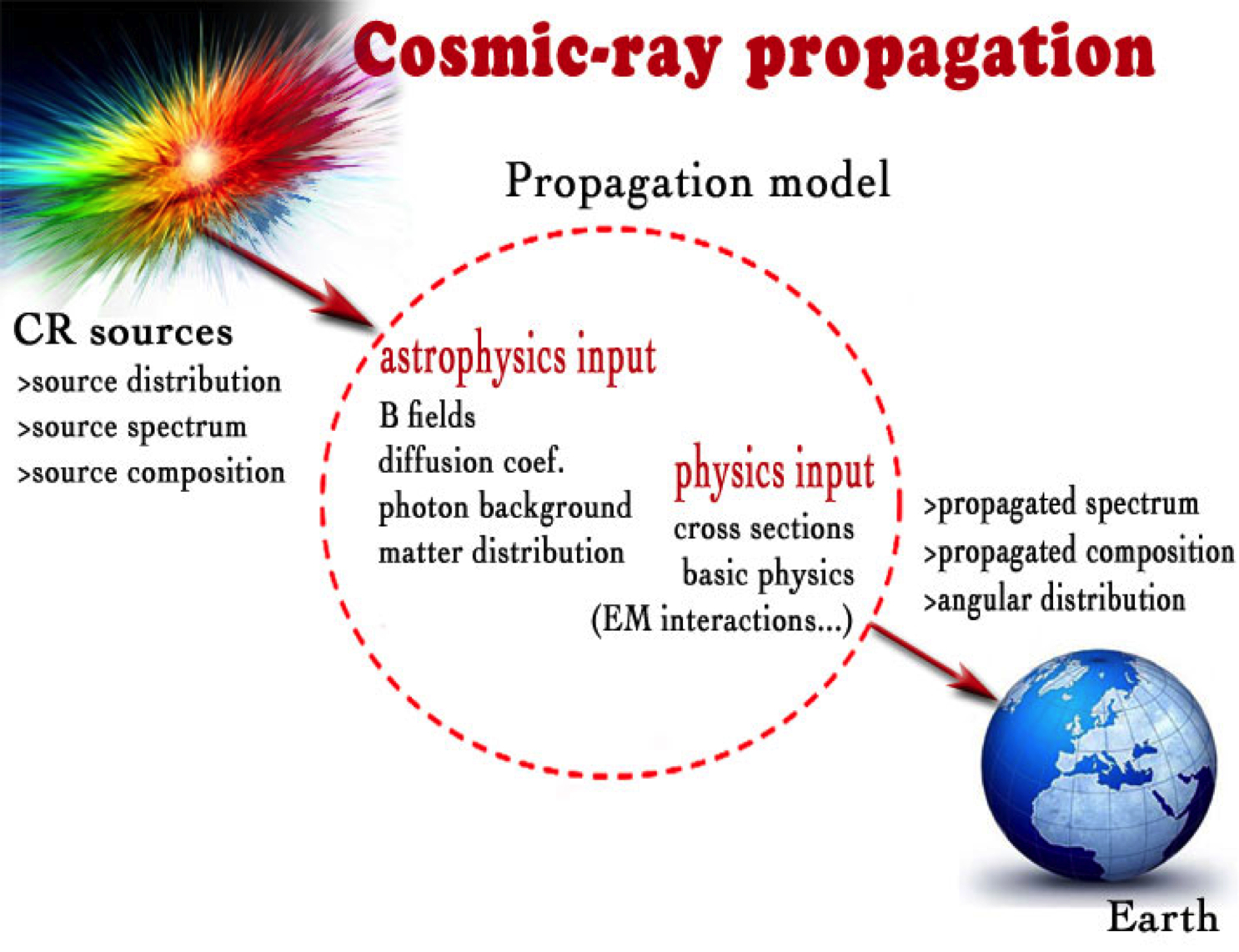 Figure: Sketch of subjects involved in the propagation of UHECR

Propagation of particles is treated numerically with great detail, taking into account the relevant energy-loss processes due to their interaction with photons from cosmic background radiations 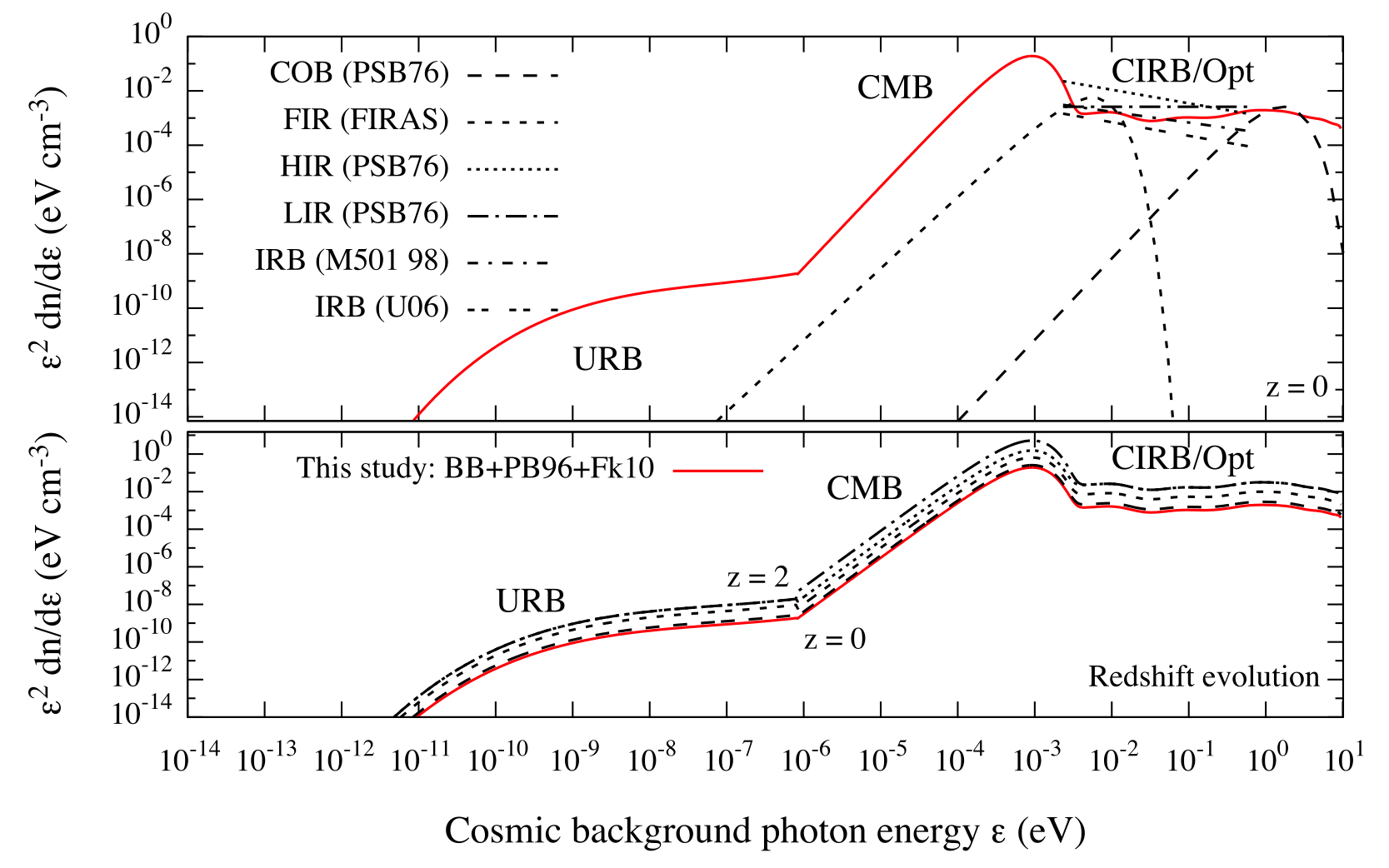 Figure: Extragalactic Background Radiation models, together with their evolution, available in HERMES

Cross-sections from different models/parameterizations (or from measurements) of the nuclear interactions between UHE particles and background photons, can be adopted. HERMES is designed to work also with an opportunely processed output of TALYS, the well-known simulator for nuclear reactions. 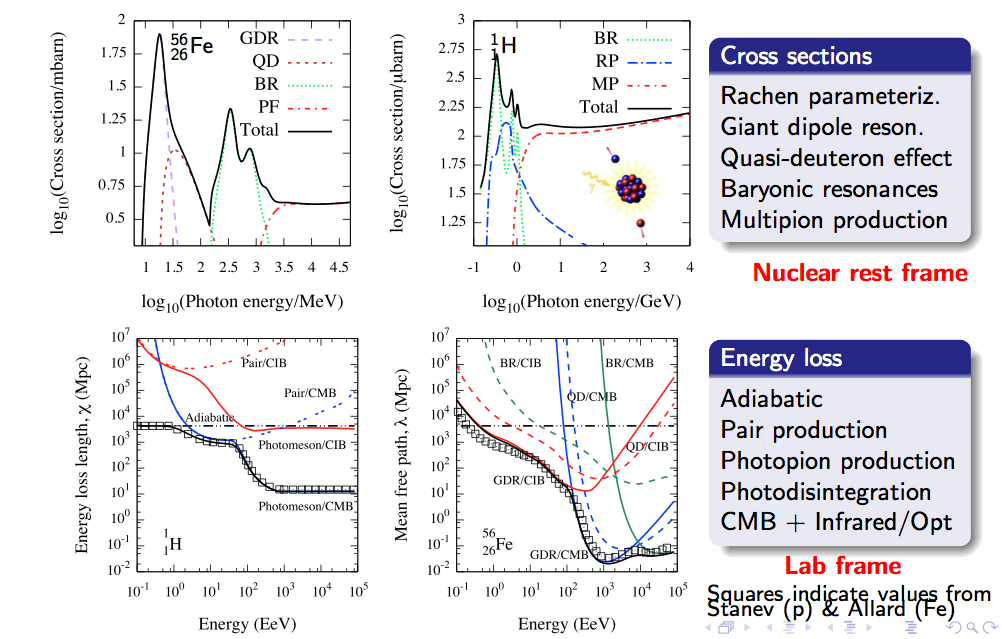 Figure: Cross-sections for nuclear interactions between Iron nuclei (top-left), Hydrogen (top-right) and background photons, available in HERMES. The energy-loss lengths and mean interaction lengths are shown in the bottom panels for each process and different components of the extragalactic background radiation

The effects of Cosmology are included, allowing the customization of the Universe where the propagation is performed. 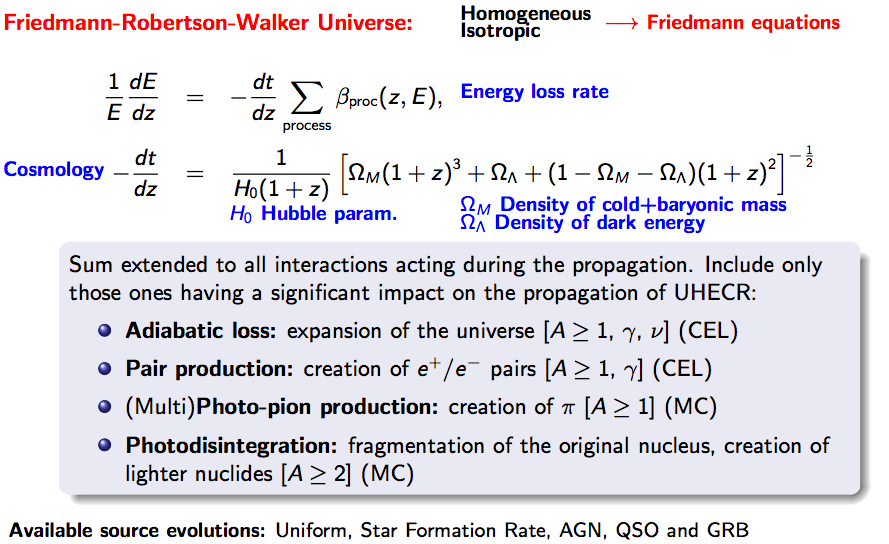 Figure: Extragalactic Background Radiation models, together with their evolution, available in HERMES

Such fields have been modeled by following the approach of Giacalone and Jokipii for a 3D isotropic and Kolmogorov-like field for the turbulent component, and many recent models for the regular component of the Galactic magnetic field. 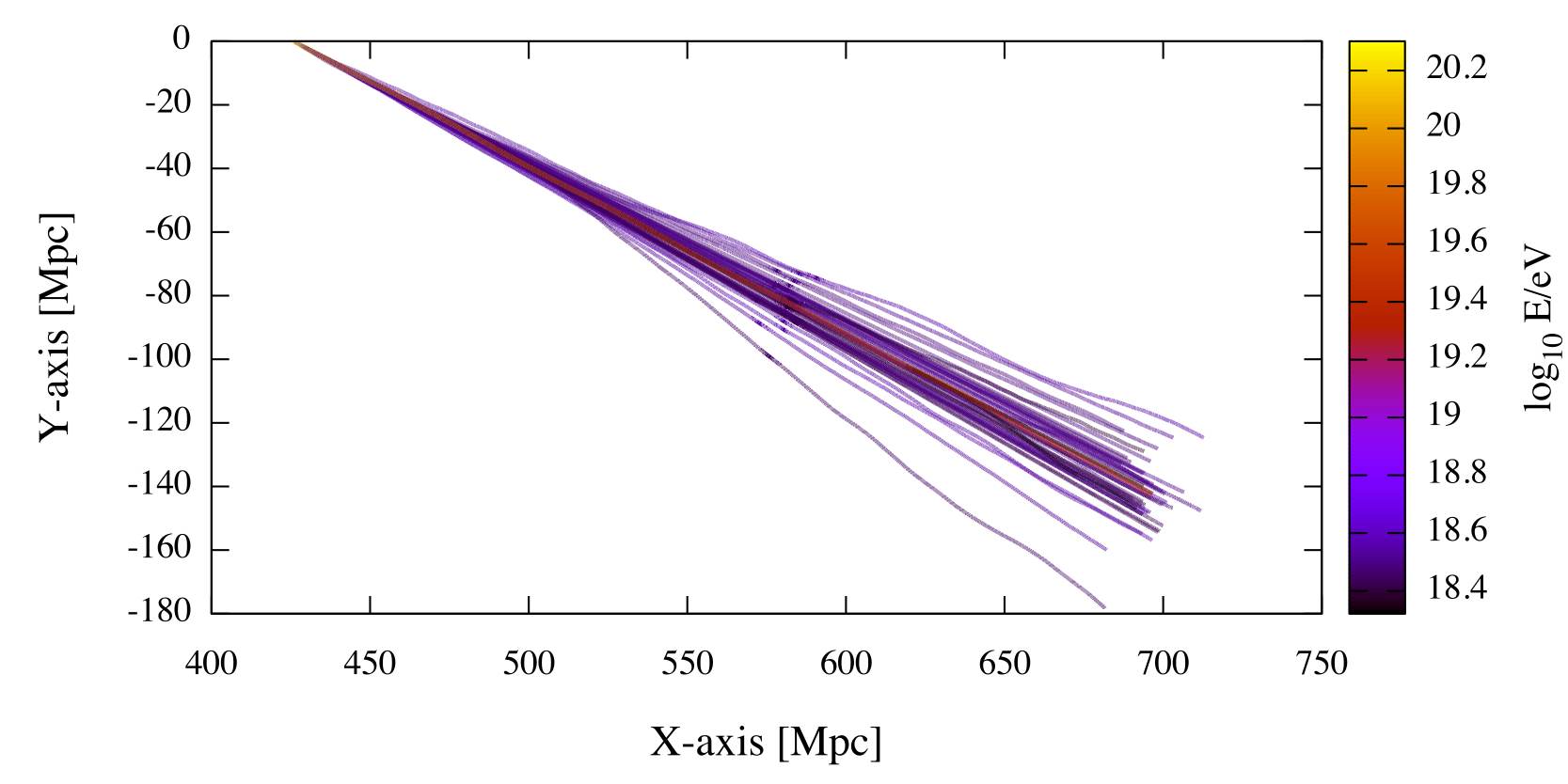 Figure: 2D projection of the 3D propagation of a single UHE Iron nucleus with 100 EeV in a turbulent magnetic field with coherence length 1 Mpc and rms strength 0.1 nG. Color codes the energy of each fragment produced by photo-disintegration of Iron. 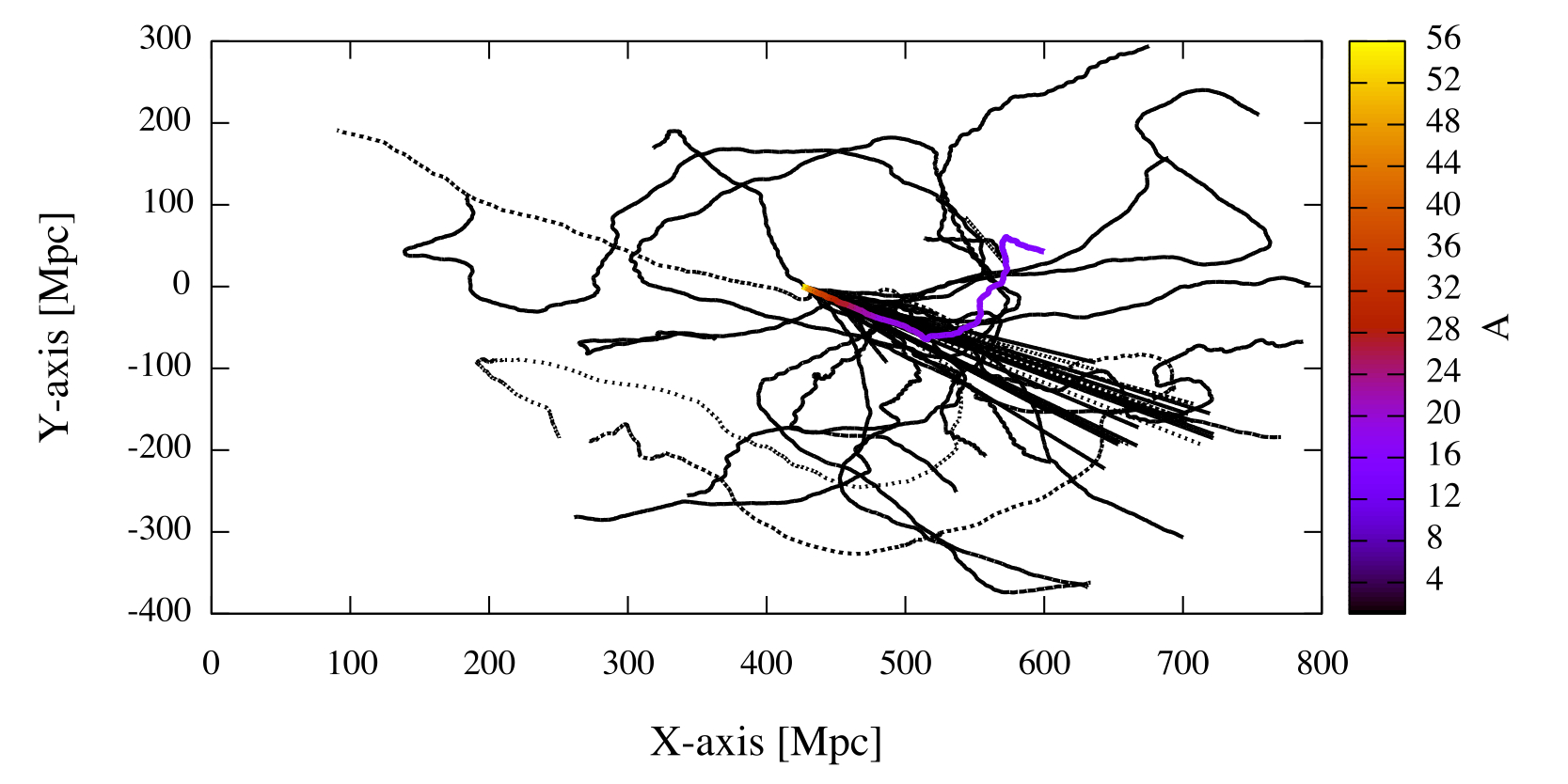 Figure: Same as the previous figure, for a turbulent magnetic field with rms strength 1 nG. Color codes the mass of each fragment produced by photo-disintegration of Iron.

In the near future, HERMES will be extended to include models for the coherent component of magnetic fields, based on advanced hydro-dynamical simulations.

As representative examples of the power of HERMES, we show here the skymaps for UHECR produced by Super Massive Black Holes and Active Galactic Nuclei. 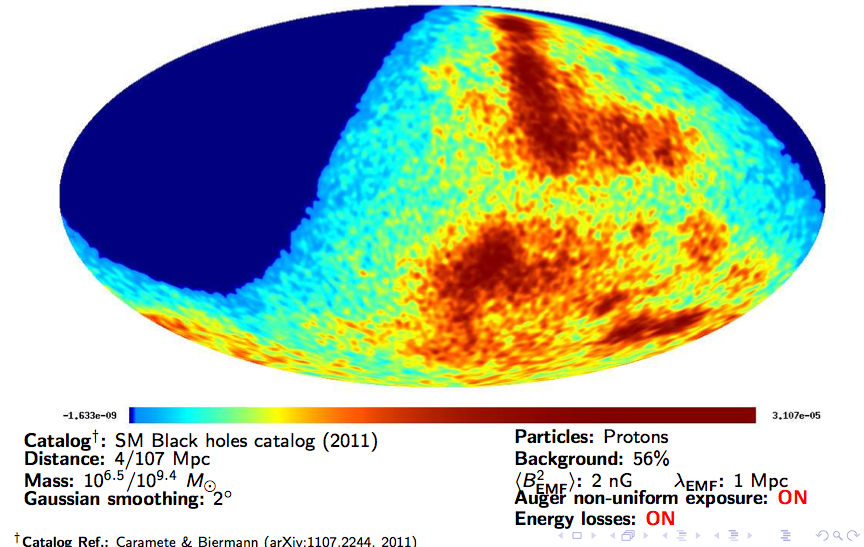 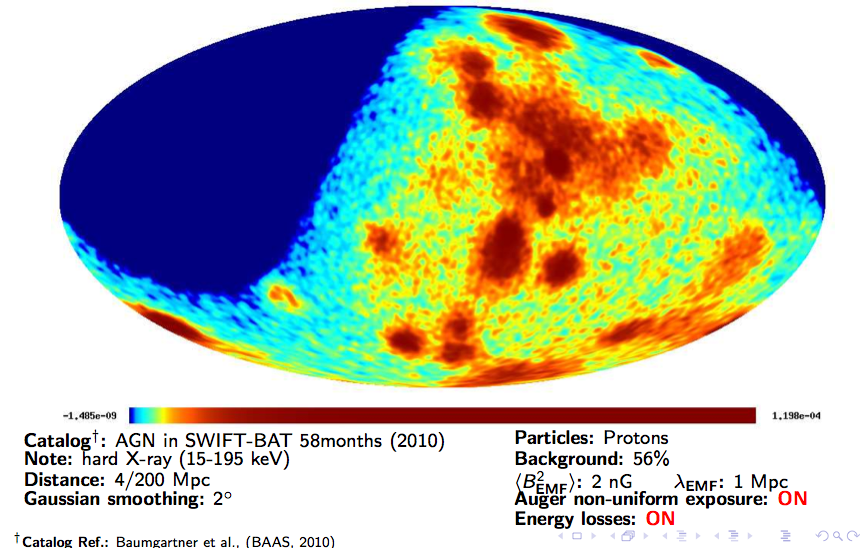 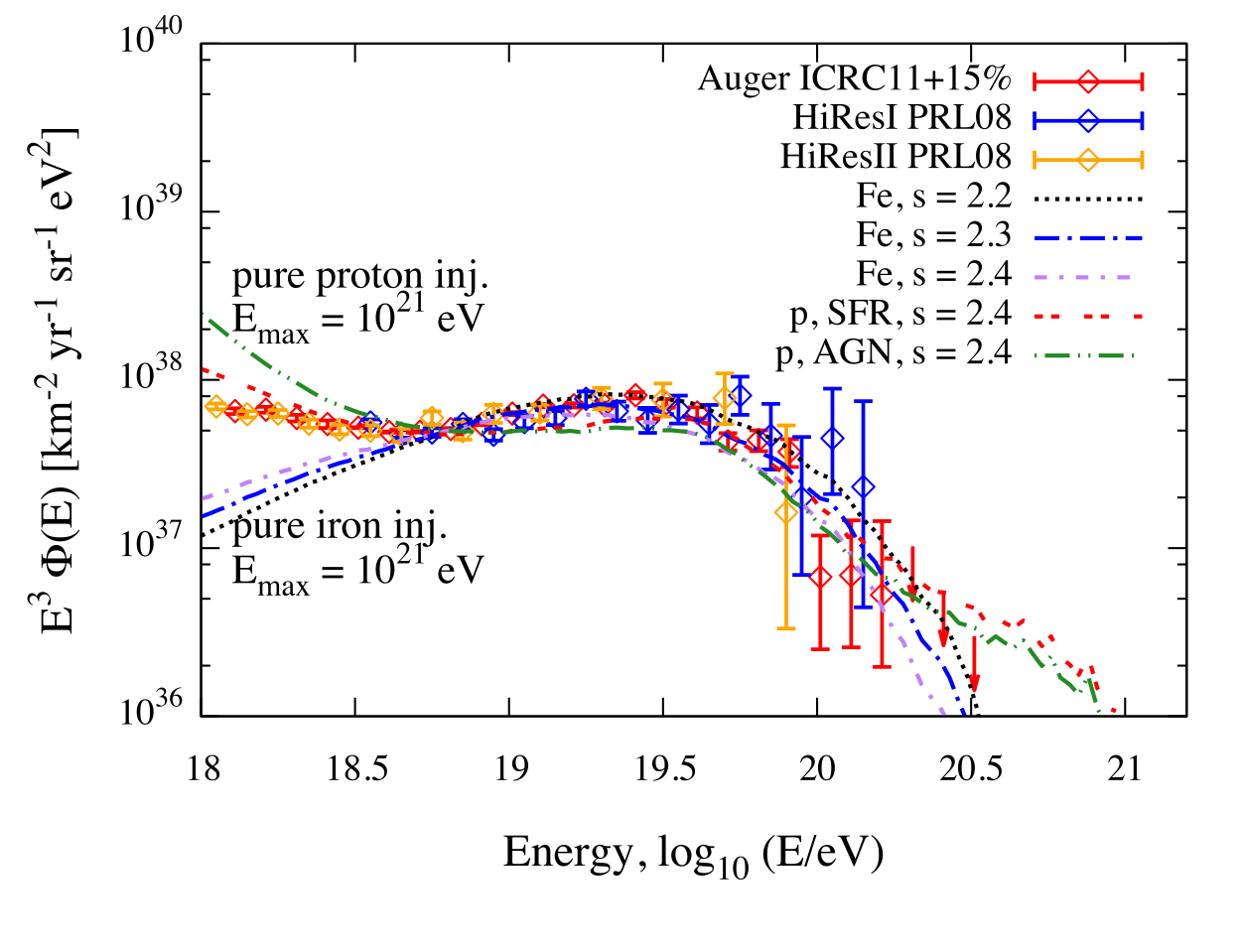 Propagation of UHE gammas and neutrinos

Multi-messenger studies are possible because of the detailed simulation of secondary particles generated during the propagation of charged nuclei, namely photons, neutrinos and electron/positron pairs. In particular, HERMES makes use of the ELECA simulator for the detailed Monte Carlo propagation of UHE gammas and the development of the corresponding electromagnetic cascades.

Representative plots will be available soon.

My own pictures are released under CC BY 3.0: http://creativecommons.org/licenses/by/3.0/.
Please, give credits to: M. De Domenico, Universitat Rovira i Virgili where not otherwise specified.