The Anatomy of a Scientific Gossip


The paper The Anatomy of a Scientific Rumor is available here: Scientific Reports (Nature Open Access)

The data, in regular single-layer or multiplex format is publicly available here


The announcement of the discovery of a Higgs boson-like particle at CERN will be remembered as one of the milestones of the scientific endeavor of the 21st century.
In this paper we present a study of information spreading processes on Twitter before, during and after the announcement of the discovery of a new particle with the features of the elusive Higgs boson on 4th July 2012.
We report evidence for non-trivial spatio-temporal patterns in user activities at individual and global level, such as tweeting, re-tweeting and replying to existing tweets.
We provide a possible explanation for the observed time-varying dynamics of user activities during the spreading of this scientific gossip. We model the information spreading in the corresponding network of individuals who posted a tweet related to the Higgs boson discovery. Finally, we show that we are able to reproduce the global behavior of about 500,000 individuals with remarkable accuracy.

Figure: Number of tweets per second as a function of time during the period of data collection.
The curves correspond to tweets containing only the CERN, Higgs, LHC keywords and at least one of them, respectively.

Figure: Points indicate the fraction of users who are active at least once (see the text for more detail) with respect to the total number of users in the dataset at the end of the period taken into consideration, as a function of time. Lines indicate the fitting results obtained separately for each temporal range by adopting our model. The rate of activation for each period is reported at the bottom of the figure. 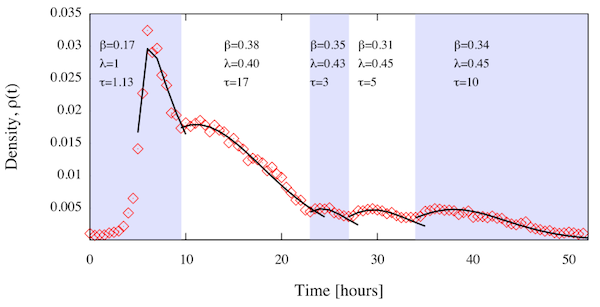 Figure: Observed evolution of the density of active users versus time (points) in Period IV, i.e., during and after the main event, from 03:00 AM, 4th July. Curves indicate the predictions obtained from our model, where the values of the corresponding parameters are reported in the figure for different sub-periods. The reported lambda refers to the initial value of the activation rate.